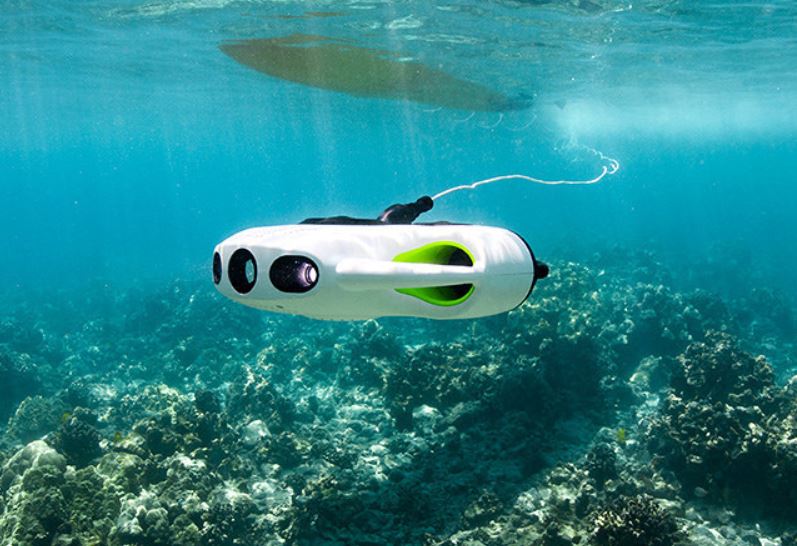 This is the first time a 6x zoom lens has been installed on a civilian underwater drone. The company that made it happen: Shanghai’s YouCan Robotics.

This week, the company’s founder and CEO, Snow Lee, unveiled the BW Space Pro, equipped with innovations like a 6x zoom lens, a feature that is so far nonexistent in products from competitors.

The new drone creates a better user experience, with live-streaming increasingly identified as one of its many – and possibly most lucrative – applications.

Combined with a 1/1.8 inch CMOS sensor and F1.4 aperture that increase the amount of light absorption of a 1/2.3 inch lens by approximately 30 percent, the BW Space Pro is designed to capture moving objects even 50 meters away and send back images of 12 million pixels and high-resolution 4K video footage.

Working constantly against turbulent currents that interfere with stable transmission of image signals, the Youcan BW Space Pro, cocooned in a protective hull made from seawater-proof high-strength plastic, is able to hold up even under tremendous water pressure. The deployment of Youcan’s unique image stabilization strategy ensures that footage remains smooth throughout the filming process.

Another upgrade probably to the delight of consumers is a shift of the old model’s three-rotary-blade power system to one composed of four rotary blades, a change that allows for more flexible vertical movement in the water.

It also enables the drone to tilt up to 45 degrees upward and downward, making it possible for it to take shots from multiple angles while navigating complex undersea topographies like the coral reefs. The device also automatically dials up and down the beams of light projected from its self-adjusting dual LED spotlights depending on the specific working environment, generating better visibility conditions to aid photographers.

With a size of 43x33x13cm, or 16x12x5inch, the BW Space Pro is more compact than its predecessor BW Space. It can move at a maximum speed of 1.5 meters per second. The built-in 9600mAh battery pack puts out enough power to keep the drone going in the water for about five hours – a surge of 45 percent in battery performance compared with similar drones in the market.

The primary user scenario remains in mass entertainment, an area where a boom of live-streaming services over the past few years has enticed civilian drone makers like DJI to tap the mania for creating and sharing aerial imagery online, a market worth potentially billions.

Youcan has been eyeing a move into the underwater live-streaming space. “Users can stand along a shoreline and use a remote to control the drone’s movement in the water,” said Lee. “Then they can send image and video back in real time to be viewed on an iPhone or tablet screen without getting wet.”

Through Youcan’s self-developed app, available for download from App Store and Google Play, users can generate buzz by sharing images and footage they shoot via social media platforms like YouTube, OBS or Panda from China – all with the press of a few buttons on the smartphone.

“BW Space Pro supports simultaneous connection of multiple devices for access to self-created content,” said Lee. “It carries a 5GHz WiFi extender that relays data at a top speed of 433Mbps, with little image damage during the process.”

The BW Space Pro is available in three configurations, BW Space Pro 4K Zoom, BW Space Pro 4K and BW Space FHD. The 4K Zoom version, equipped with a zoom lens, retails at $1,999, while its two cheaper variations sell for $1,399 and $999 due to differences in lens, apertures and other specifications. The drones are due to ship globally in July. To know more, please visit the website of Youcan Robot at https://store.youcanrobot.com/