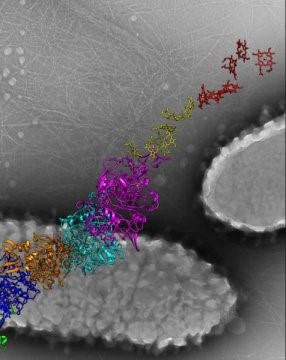 Scientists and engineers face a constant battle to create smaller, lighter batteries to power advanced electronics like smartphones and pacemakers. Little did they realize the answer might be found in strange bacteria that live in soil and sediment and conduct electricity.

The bacteria do so through a seamless biological structure never before seen in nature. Engineers may be able to co-opt the structure to miniaturize electronics, create powerful-yet-tiny batteries, build pacemakers without wires, and develop a host of other medical advances that could change the world of electronics as we know it.

Scientists had believed Geobacter sulfurreducens conducted electricity through common, hair-like appendages called pili. Instead, a researcher at the University of Virginia School of Medicine and his collaborators have determined that the bacteria transmit electricity through immaculately ordered fibers made of an entirely different protein. These proteins surround a core of metal-containing molecules, much like an electric cord contains metal wires. This “nanowire,” however, is 100,000 times smaller than the width of a human hair.

This tiny-but-tidy structure, the researchers believe, could be tremendously useful for everything from harnessing the power of bioenergy to cleaning up pollution to creating biological sensors. It could actually serve as the bridge between electronics and living cells.

Geobacter bacteria play important roles in the soil, including facilitating mineral turnover and even cleaning up radioactive waste. They survive in environments without oxygen, and they use nanowires to rid themselves of excess electrons in what can be considered their equivalent to breathing. These nanowires have fascinated scientists, but it is only now that researchers at UVA, Yale and the University of California, Irvine, have been able to determine, using high resolution cryo-electron microscopy available at UVA, how G. sulfurreducens uses these organic wires to transmit electricity,

The Right to Repair