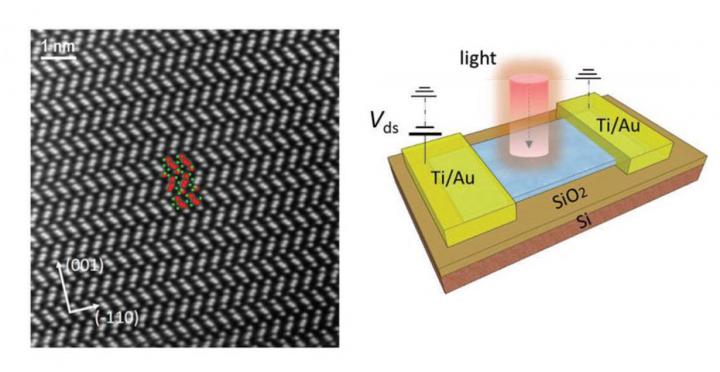 Finding devices to replace costly CMOS-incompatible III-V semiconductors for photodetectors that are both high performance and environmentally friendly has been a challenge. But researchers at the Institute of Photonic Sciences have recently started using bismuth sulphide (Bi2S3) flakes on a silicon dioxide substrate that allow for additional light absorption and can create high gain, low noise, high sensitivity photodetectors.

By controlling defects in materials it’s possible to extend the semiconductor’s spectral reach beyond its bandgap and expand the material availability for the infrared part of thespectrum.

The Bi2S3 creates extended in-gap states for infrared detectors with fast and high photo-response levels in the short-wave infrared range.

The team of researchers, led by ICREA Prof at ICFO Gerasimos Konstantatos, first created a photoconductive detector that allowed an increased absorption of light below the bandgap value of Bi2S3, that is sub-bandgap. Their second photodetector created a sulphur deficiency mechanism by synthesizing Bi2S3 crystals during a sulfurization process (changing the concentration percentages of Bi and S in the crystal). By subsequently refilling the sulphur vacancies and performing a mild chemical treatment on the sulphur-deficient-based detector through a surface passivation process of the crystal, they were able to produce a time response of 10ms for the infrared and visible light range and detector that was 50 times faster than their original.

The results of this study provide new insights into the role atomic vacancies play in the electronic structure and how sub-bandgap photoresponse effects can enable ultrasensitive, fast, and broadband photodetectors.

The EU Restriction of Hazardous Substances Directive that took effect in 2006 and its subsequent Waste Electrical and Electronic Equipment Directive, while not globally binding, have led to both state and voluntary industry initiatives to ensure manufacturing and consumer compliance.