Okay, so it’s still early in the discussion phase. Still, it looks like the US is trying to expand the restrictions on semiconductors to include other emerging technologies, such as quantum computing and artificial intelligence. The goal is to stifle China’s military and surveillance capabilities. This information is based so far on unnamed sources.

The US has ramped up actions to suppress China’s ability to develop certain technologies that it sees as key in the competition with its top strategic rival. Regulations recently released also limit how US citizens and residents participate in Chinese tech firms.

The Commerce Department’s Bureau of Industry and Security declined to comment. The White House National Security Council says it isn’t aware of discussions on such additional controls.

Now my two cents. It’s been a couple of years since I read AI Superpowers—China, Silicon Valley, and the New World Order by Kai-Fu Lee. Lest you think that the author is outrageously biased, here’s a review comment, “In this riveting page-turner, one of the founding fathers of China’s AI industry tells the inside story of China’s rise as an AI superpower and shares his inspiring recipe for us flourishing rather than floundering with AI” —Prof. Max Tegmark, professor, MIT.

It seems we might have already missed the AI-ban possibilities. The book indicates how and why China will be ahead (remember it was published in 2018). I looked further and found a recent study by IBM (May 2022), and here’s a chart from the report showing AI adoption rates around the world: 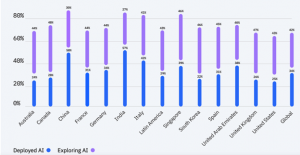 The report states that Chinese and Indian companies are leading the way, with nearly 60% of IT professionals in those countries saying their organization already actively uses AI, a dramatically higher rate of adoption than in markets like South Korea (22%), Australia (24%) US (25%) and the UK (26%).

The reality is that a Quantum Computing technology ban would be more useful.

ArcBest Works to Bring Neurodiversity to the Workplace