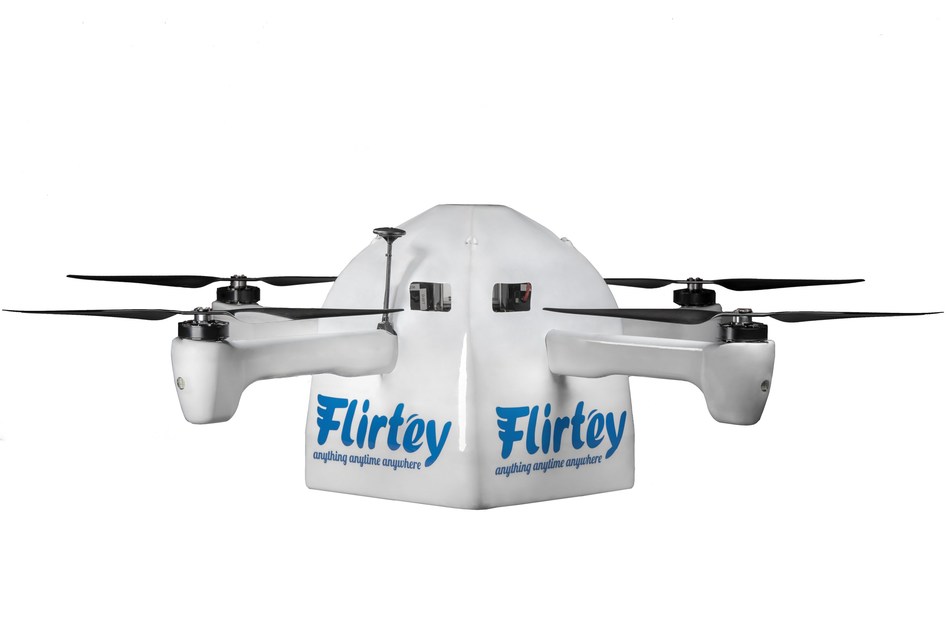 Flirtey’s system is designed to safely get packages to customers with the delivery goal of fewer than 10 minutes using drones.

Flirtey’s drone delivery technology has been developed from the ground up, originating from NASA’s drone program. Flirtey Founder and CEO, Matthew Sweeny, has brought together a team of aviation industry veterans from NASA, Raytheon, Lockheed Martin, and SpaceX, as well as military veterans from the army, navy, and air force. The Flirtey Eagle builds upon the advanced technologies developed for Flirtey’s previous generation aircraft that conducted the first Federal Aviation Administration (FAA) approved drone delivery in the United States, which is going on display alongside the Wright Flyer in the Smithsonian National Air and Space Museum in Washington, D.C. Flirtey’s goal is to not only meet but to surpass the rigorous safety standards of the FAA. Flirtey’s regulatory approvals include:

Flirtey estimates last-mile drone delivery is more than a $100-billion market globally with current technology. Autonomous drone delivery will reduce the cost of last-mile delivery, which represents 53% of the total cost of delivery.

Along with improving lifestyles by delivering on-demand perishables and goods, Flirtey drones take delivery vehicles off the roads, greatly lessening CO2 emissions from our atmosphere and increasing the overall safety of the transport system. Flirtey and the City of Reno were selected into the FAA and Department of Transportation’s highly competitive Unmanned Aircraft System (UAS) Integration Pilot Program (IPP), in which only 10 locations in the U.S. were selected to participate. Within the IPP, Flirtey and the City of Reno have partnered with REMSA, local emergency medical services provider, to deliver AEDs to those in need. Flirtey’s AED delivery technology has the potential to save 150,000 lives per year.

Based on demand from customers, Flirtey expects demand to outstrip supply initially. Flirtey’s drone delivery system was designed from the outset to meet the anticipated high demand. Flirtey’s aircraft is made in the U.S.A. Flirtey technology is protected by more than 25 patents issued and pending in the U.S. and worldwide.

Flirtey is on course to conduct drone deliveries to U.S. homes as early as 2019.

Discovery of Localization States Could Be Key to Brighter LEDs

Fish Where the Fish Are: Software Firms Base Operations Close to Skilled Workers