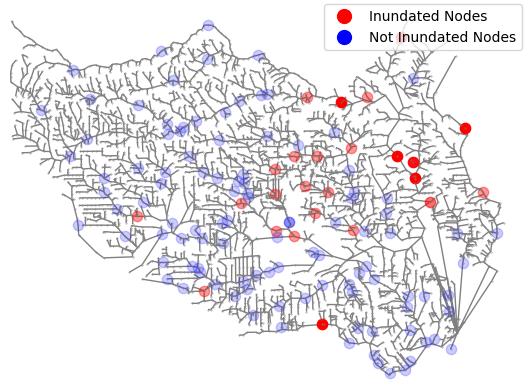 Increased extreme weather events is one of the hallmarks of climate change. Flooding is one of the most dangerous of these events, damaging infrastructure, disrupting medical supply deliveries, and leading to loss of life. Now researchers at Texas A&M University believe they can accurately predict the evolution of floods in extreme situations like hurricanes  by incorporating the architecture of city drainage systems and readings from flood gauges into a comprehensive statistical framework. With their new approach, the researchers said their algorithm could forecast the flow of flood water in almost real-time, which can then lead to timelier emergency response and planning.

“Not knowing where flood water will flow next is particularly detrimental for first responders who need to gauge the level of flooding for their rescue operations,” said Dr. Ali Mostafavi, assistant professor in the Zachry Department of Civil and Environmental Engineering. “Our new algorithm considers the underground drainage channels to provide an accurate representation of how floods propagate. This tool, we think, can vastly help disaster management because first responders will be able to see which way flood water will flow in real time.”

A description of the researchers’ algorithm can be found in the December issue of the journal Computer-Aided Civil and Infrastructure Engineering.

Hurricanes are notorious for wreaking havoc on shorelines, toppling trees, tearing down power lines and above all, causing severe floods. Conventionally, scientists have used physics-based models to predict where water might collect, overflow and cause flooding. In essence, these models capture how physical features of the earth’s surface and urban landscapes affect the flow of water over the ground.

While robust at predicting when and where floods will happen under most rainfall conditions, Mostafavi said these traditional models do not perform as well at predicting floods during incidents of torrential rainfall, like Hurricane Harvey.

“Physics-based models offer one perspective on how floods can spread, which is extremely useful, but the picture they provide is somewhat incomplete,” he said. “We wanted to use existing data on how past floods have spread through the drainage channels to develop a model that would be able to predict, within a certain level of preciseness, how future floods will spread.”

Drainage channels are an elaborate network of intertwined channels that meet together at junctions called nodes. Thus, flooding in one channel can directly or indirectly affect other channels and cause floods to spread, much like a domino effect.

To predict which way flood water will flow along drainage channels and cause an inundation, Mostafavi and his team developed a probability-based model that was fed, as one of its inputs, the water-level readings on flood gauges. These readings were for different time points during two major flooding events in Texas: Hurricane Harvey in 2017 and Houston’s Memorial Day flood in 2015.

Once their algorithm was trained on water flow patterns through the drainage network for these heavy rainfall events, the researchers tested if their model worked by checking if it could predict the flood patterns that had been observed during Houston’s Tax Day flood in 2016.

They found that their model achieved an accuracy of 85% in predicting how the flood propagated through the city’s drainage system during the Tax Day flood. Although the model was validated using a past flood event, Mostafavi said that the model’s success suggests that it will also be able to predict how new floods will propagate through the city’s drainage networks. This insight could help emergency responders take preemptive steps towards evacuations, he said.

Noting the caveats of their model, Mostafavi said that the performance of their algorithm could be compromised if the sensors on flood gauges fail. However, complementing the predictions coming from physics-based models with those from their team’s new algorithm can once again restore the accuracy of flood prediction.

“Traditional models and our data-driven models can be used to complement each other to give a more precise picture of where flood water will go next,” said Mostafavi. “Hurricanes of the magnitude of Harvey or Katrina are generally considered a one-in-a-thousand-year event, but they may not be as rare if we consider the changes in global weather patterns because of climate change. But we now have more robust tools to weather the storm.”

How to Keep Your IT Equipment Cool and Avoid Expensive Disruption