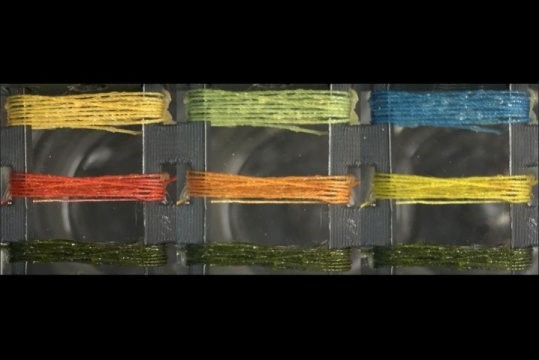 Scientists at Tufts University have developed a fabrication method to create dyed threads that change color when they detect a variety of gases. Woven into clothing, smart, gas-detecting threads could provide a reusable, washable, and affordable safety asset in medical, workplace, military and rescue environments.

The researchers demonstrated that the threads can be read visually, or even more precisely by use of a smartphone camera, to detect changes of color due to analytes as low as 50 parts per million.

While not replacing the precision of electronic devices commonly used to detect volatile gases, incorporation of gas detection into textiles enables an equipment-free readout, without the need for specialized training. Such an approach could make the technology accessible to a general workforce, or to low resource communities that can benefit from the information the textiles provide.

A three-step process “traps” the dye in the thread. The thread is first dipped in the dye, then treated with acetic acid, which makes the surface coarser and swells the fiber, possibly allowing more binding interactions between the dye and tread.

Finally, the thread is treated with polydimethylsiloxane (PDMS), which creates a flexible, physical seal around the thread and dye, which also repels water and prevents dye from leaching during washing. Importantly, the PDMS is also gas permeable, allowing the analytes to reach the optical dyes.

The tested dyes changed color in a way that is dependent and proportional to the concentration of the gas as measured using spectroscopic methods. The threads even worked under water, detecting the existence of dissolved ammonia.

Since repeated washing or use underwater does not dilute the dye, the threads can be relied upon for consistent quantifiable detection many times over.