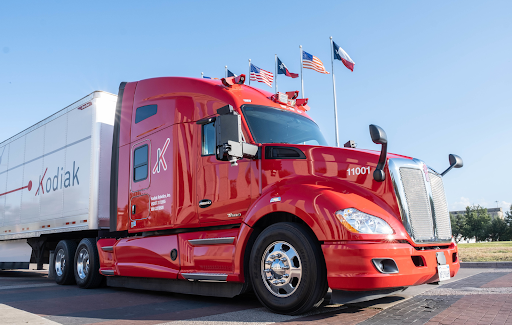 Self-driving trucks are designed to make highways safer and reduce the cost of carrying freight. For longer routes, known as the middle mile, they can also reduce the time it takes to move goods. Hopefully, they can also help address the commercial driver shortfall, which the American Trucking Association estimated was 51,000 in 2017.

With a growing fleet of trucks, recently launched freight operations in Texas and a new North Texas facility to support its testing and freight operations, Kodiak’s CEO and Co-Founder Don Burnette said his team of autonomous vehicle industry veterans has “a clear vision for how to make it work and work safely.”

The Dallas-Fort Worth area is growing at the rate of a million new residents per decade, making the safe and reliable movement of people and goods something that demands strategic planning. Municipal planning officials in the area see technology as part of the answer and want to position the region as a leader in the AV industry.

Texas is a leader in the testing and implementation of connected and automated vehicles. Kodiak actively seeks partnerships with academia and public agencies to ensure the safe deployment of its new technologies.

The company believes that while humans often repeat their mistakes, the software learns from them, and has pledged not to put a truck on the road without a human behind the wheel until they’ve proven their trucks are safer than human drivers.

IoT-enabled SCM Will Lead to Rise of New Ecosystem