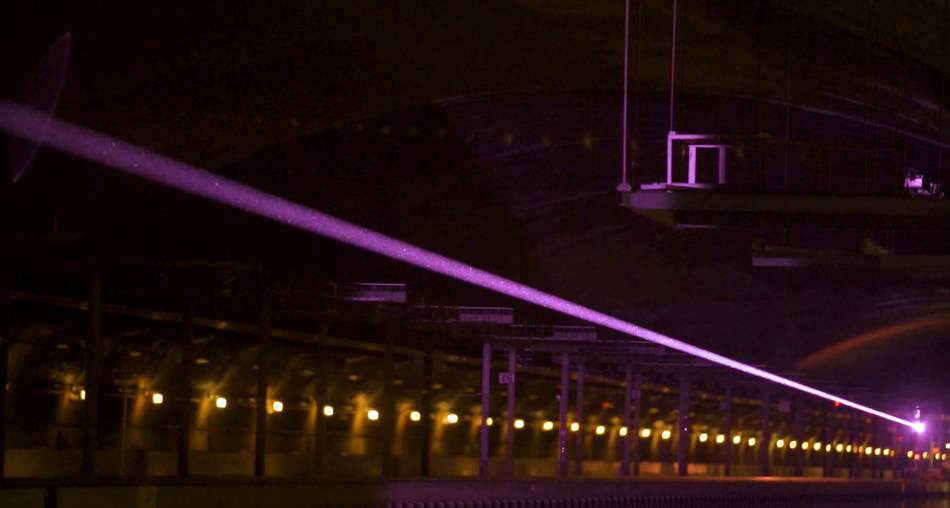 It was a long-range, free-space power beaming system – the first of its kind. Attendees on May 23, 2019 could see the system itself—the two 13-foot-high towers, one a 2-kilowatt laser transmitter, the other a receiver of specially designed photovoltaics. But the important part, the laser that was beaming 400 watts of power across 325 meters, from the transmitter to the receiver, was invisible to the naked eye.

On one end of the of the testing facility — one of the largest test facilities for model ships in the world — the receiver was converting the laser energy to DC power, which an inverter was turning into AC power to run lights, several laptops, and a coffeemaker that the organizers were using to make coffee for the attendees, or “laser lattes.”

As more than one person there had noted, it wasn’t exactly an exciting scene. But when you’re transmitting hundreds of watts of power with a laser beam “exciting” is not what you’re aiming for. You want it quiet, boring and, most importantly, safe.

And so it was.

“Power beaming, the concept, has been around for decades and there have been laboratory demonstrations, but this is really a first and a new technology that’s getting fielded,” explained Tom Nugent, chief technology officer of PowerLight Technologies, the hardware provider for the Power Transmitted Over Laser (PTROL) project.

The culmination of the PTROL project’s second phase, the demonstration was two years in the making for PowerLight and Paul Jaffe, an electronics engineer with the U.S. Naval Research Laboratory. During a briefing that preceded the demo, Jaffe had described that day’s demonstration as historic.