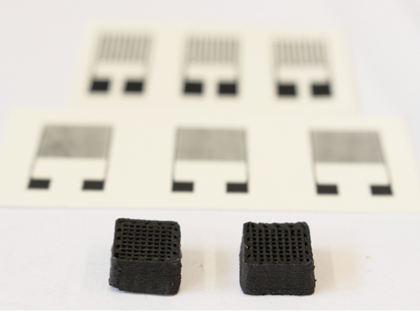 Producing electrical circuits using additive processes such as robotic 3-printing has had great success. However, the metal particles that make such “inks” electrically conductive are causing more electronic waste. Given the rise of disposable sensors, some used for only a few days, the volume of waste will grow.

The researchers chose inexpensive carbon for conductive material in the form of elongated graphite platelets mixed with tiny soot particles that establish electrical contact between these platelets in a matrix made of shellac. Previously used to make records, today, it is used as a varnish for wooden instruments and fingernails.

At “rest,” the ink is somewhat viscous. But, at the moment of printing, when subjected to a lateral shear force, it becomes more fluid. When used in additive manufacturing, such as 3D printing with a robotic arm, however, an ink that is too viscous would be too rigid and too liquid during printing; the solid components could separate and clog the printer’s nozzle. Optimizing the formulation and the relative composition of the components, the team developed several variants of the ink that can be used in different 2D and 3D printing processes.