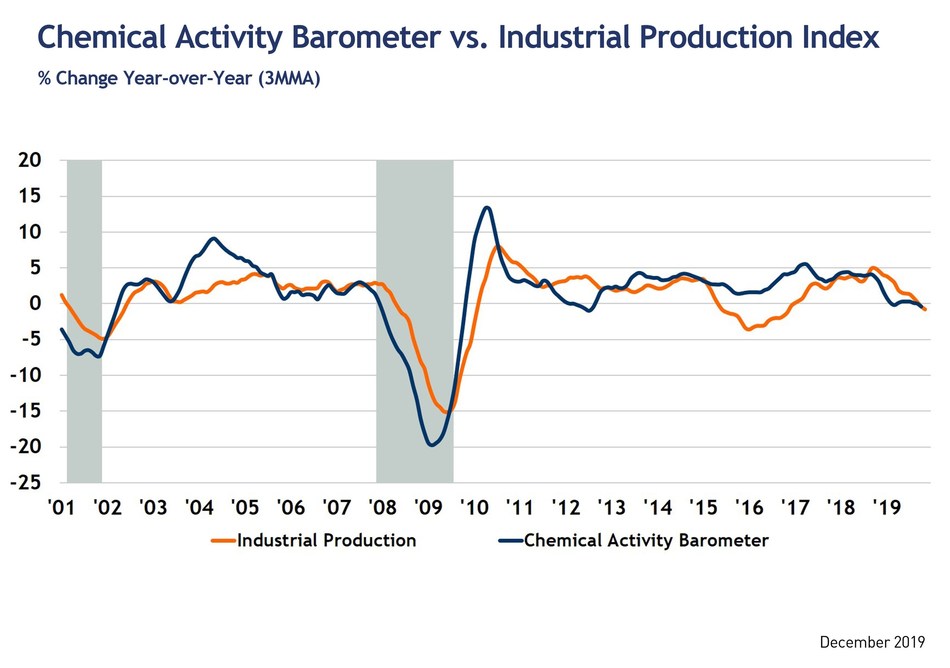 Derived from a composite index of chemical industry activity and with an early position in the supply chain, chemical industry activity has been found to consistently lead the U.S. economy’s business cycle. This barometer can be used to determine turning points and likely trends in the broader economy. Month-to-month movements can be volatile, so a three-month moving average of the CAB reading is provided. This provides a more consistent and illustrative picture of national economic trends.

Applying the CAB back to 1912, it has been shown to provide a lead of two to 14 months, with an average lead of eight months at cycle peaks as determined by the National Bureau of Economic Research. The median lead was also eight months. At business cycle troughs, the CAB leads by one to seven months, with an average lead of four months. The median lead was three months. The CAB is rebased to the average lead (in months) of an average 100 in the base year (the year 2012 was used) of a reference time series. The latter is the Federal Reserve’s Industrial Production Index.

The CAB was stable (0.0% change) in December 2019 on a three-month moving average basis following a 0.1% gain in November. On a year-over-year basis, the barometer rose 0.4% (3MMA) and follows two months of negative year-earlier comparisons.

“The CAB signals slow gains in U.S. commerce into the third quarter of 2020,” said Kevin Swift, chief economist at ACC.

Production-related indicators eased in December. Although trends in construction-related resins, pigments and related performance chemistry were mixed, they suggest further slow gains in housing, which has been on an upward trend. Plastic resins used in packaging and for consumer and institutional applications were mixed. Performance chemistry eased, reflecting weakness among industrial end-use markets. U.S. exports were weak. Equity prices rose sharply again this month, while product and input prices were mixed. Inventory and other indicators were mixed.

*Percentage changes may not reflect index values due to rounding.